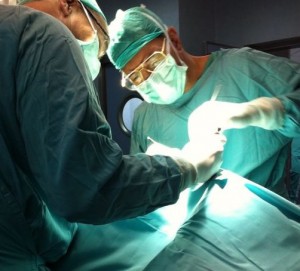 Specialist in Plastic, Reconstructive and Aesthetic Surgery, since the end of his hospital training period, as an internal and resident physician (MIR).

He obtained a Bachelor of Medicine and Surgery from the University of Valencia in 1986, developing his practical training between the Clinical and General University Hospitals of Valencia, also passing the final Degree exam. He reached the Doctor of Medicine and Surgery Degree, and also graduated in Osteo- Articular Therapy from the Swedish School.

Title of Expert in Vascular and Nervous Microsurgery, College of Physicians of Barcelona and Center of Experimental Surgery of Sabadell (2008-2009).

He has completed his training through the periodic incorporation to various national and foreign hospitals, both American and European, in reconstructive hand surgery units, locomotor system and microsurgery, congenital malformations, craniofacial pathology and genital surgery. He has also participated as a speaker and guest in various courses and congresses of the specialty, being the author of multiple scientific publications in Spanish and English, among the latter:

He has belonged to the New York Academy of Sciences, and to the Medical Colleges of Valencia, Malaga and Barcelona. He is a full member of the Spanish Society of Plastic, Reconstructive and Aesthetic Surgery.

Over the last decade he has been part of surgical teams in reparative surgery campaigns for disadvantaged geographic areas of Central America.